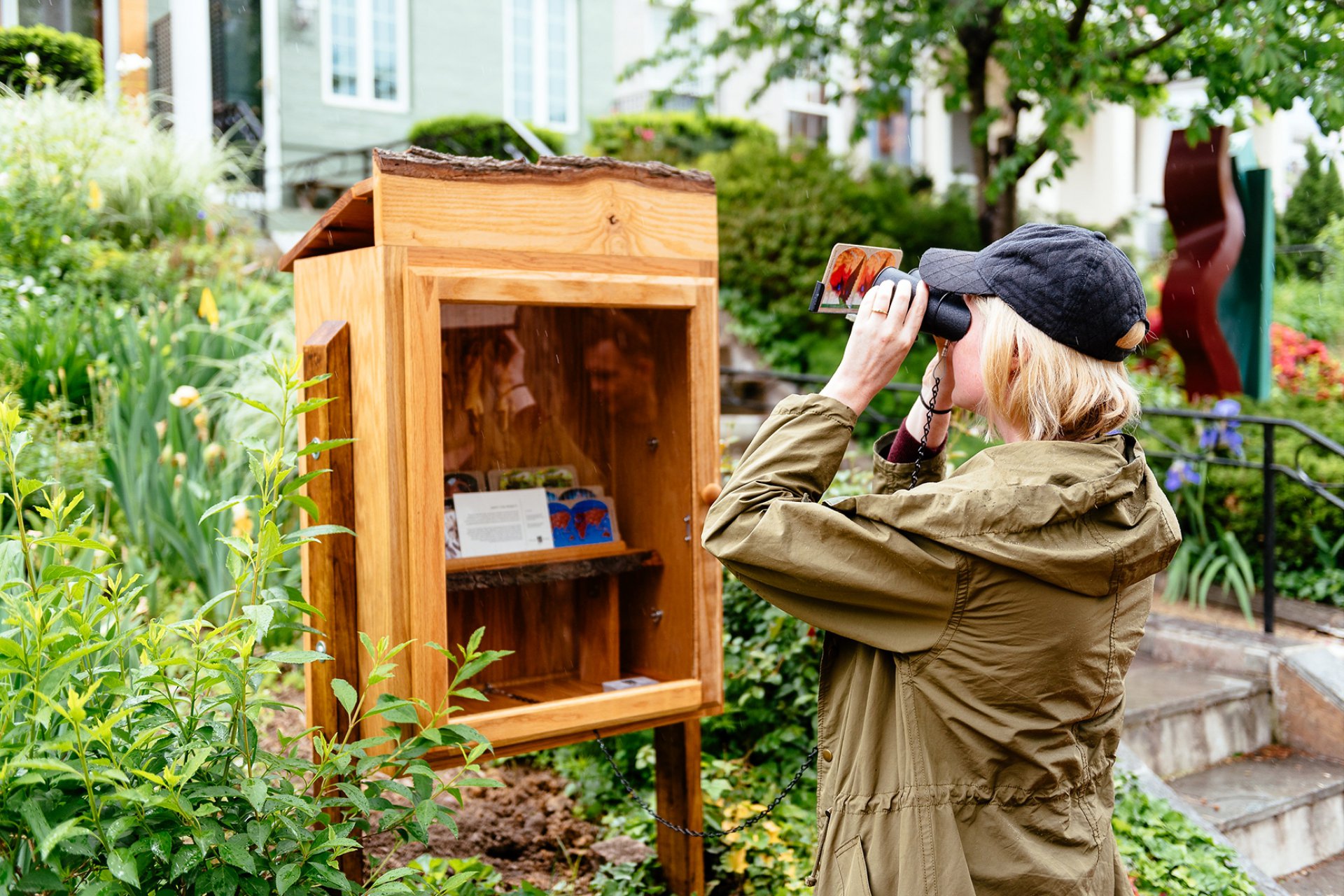 RAY: What does extreme mean to you?

"Photography has always been connected to technological advance, which inherently reflects an extreme, insatiable appetite for new ways of interpreting our world through images."

RAY: The curatorial team of RAY 2018 states that “extreme is inextricably tied to photography.“ Do you agree?

KC & FE: Yes. Photography has always been connected to technological advance, which inherently reflects an extreme, insatiable appetite for new ways of interpreting our world through images.

RAY 2018: You started Birding the Future in 2013 in Queensland and you are still working on it now in 2018. How did you come across this topic and why are you still pursuing this focus?

KC & FE: When we met, we both had worked on issues of survival and environmental change (Krista) and pollution and protection of habitats (Frank) for years. Our overlapping interests quickly became apparent. Birds are not only bio-indicators, but also seen as “message bearers” across cultures, countries, ecologies, and timescales. We have both fallen in love with birds through this project and have discovered it is a lifelong project to explore the stories, the science and cultural connections of birds. 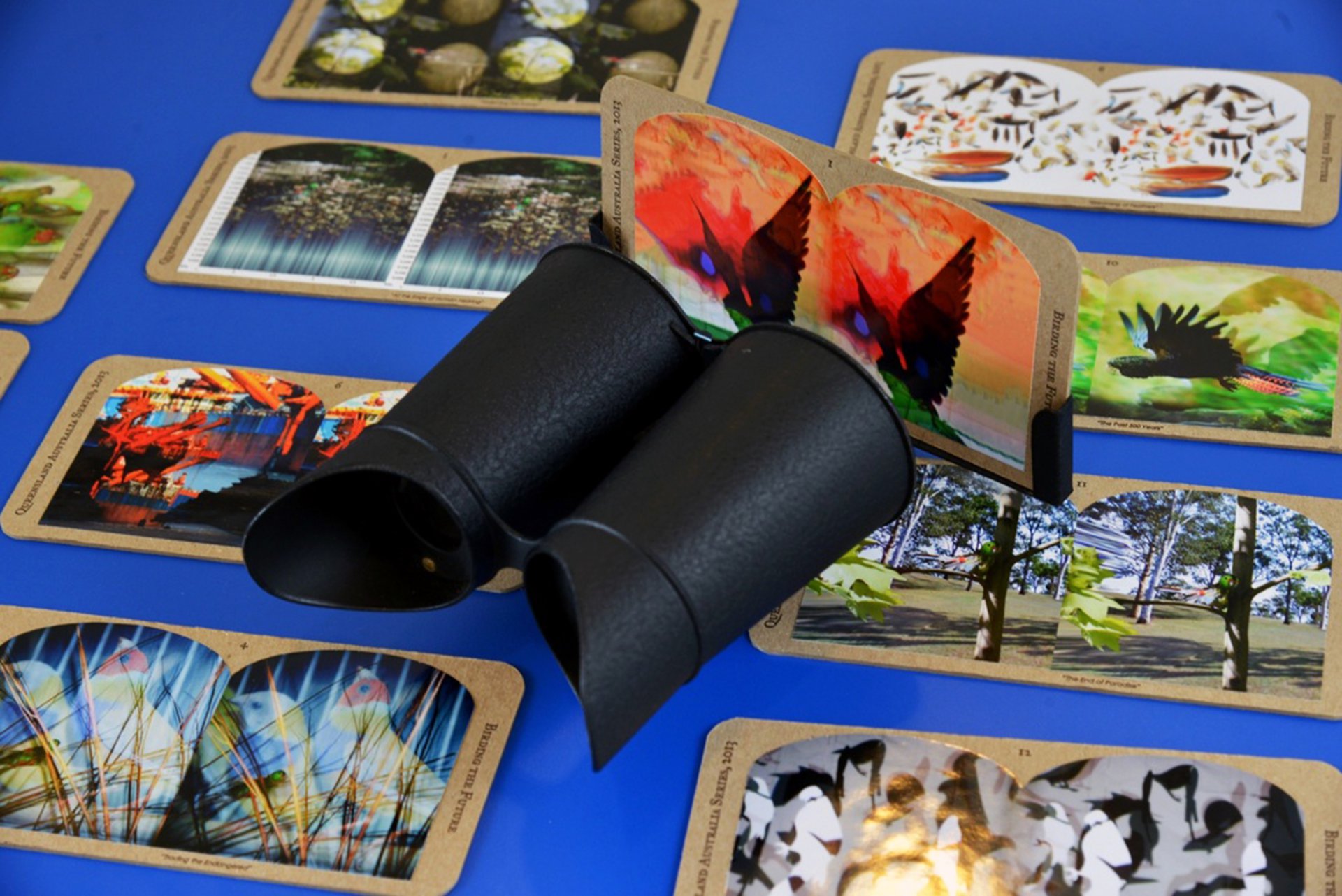 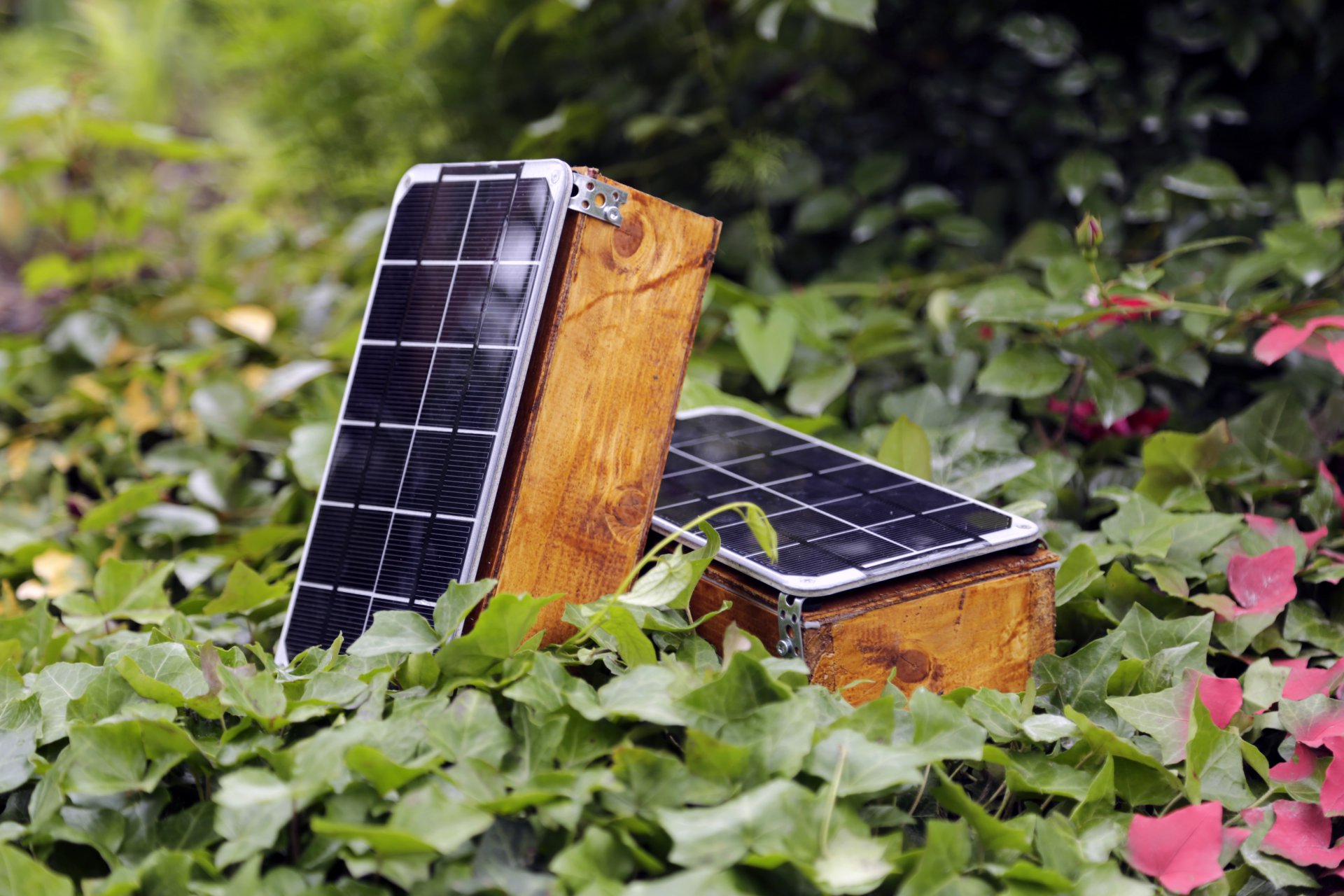 "Birding the Future is always looking for alternative ways people might encounter art where the viewer is no longer simply a bystander but rather, deeply implicated in the exploration of these critical topics."

KC & FE: Birding the Future is always looking for alternative ways people might encounter art where the viewer is no longer simply a bystander but rather, deeply implicated in the exploration of these critical topics. The stereoscope was chosen as the viewing instrument for its potential to heighten perceptual awareness and provide a historical link to the human impact on the environment. Many environmental issues started to accelerate around the same time as the development of this technology.

We also use multi-channel sound consisting of calls of endangered birds particular to a region that are extracted to create Morse code messages based on tales, stories and poetry in which birds speak to humans. These are combined with unmodified calls of extinct birds engaging visitors in experiencing memories of the past and considering a future of less biodiversity. Over the duration of the exhibition the bird calls are computer manipulated in real-time to project the rate of extinction for the end of the century by decreasing the density and diversity of bird calls.

RAY: You’re installations implement a lot of different media: sound, video … it offers a three-dimensional experience for the visitor. How do you choose the subject for the stereoscopic images?

KC & FE: Subjects are selected based upon the birds and issues of a particular region. Rather than creating stereoscopic images emulating photography of the time, images are highly composed, stylized and contain both real and imagined spaces. The subjects also directly relate to the text integrated onto the back of the cards.

RAY: What is the most important thing you have learned about the population of birds in urban areas and about the future of birding in general?

KC & FE: There are so many issues around birds in urban areas such as light pollution causing collisions, frequency shifts in birdsong in response to noise level, changes in stress levels, changes in foraging behavior, and changes in breeding cycles.

Many scientists now predict that almost a third of all bird species will have disappeared by the end of this century. Birding in the future will then mean a kind of “extinction of experience” as discussed by Robert Michael Pyle, where future generations will increasingly know and experience fewer species and overall less biodiversity. And where experiences people do have will be highly contained within urban areas and with species able to adapt well to human environments. 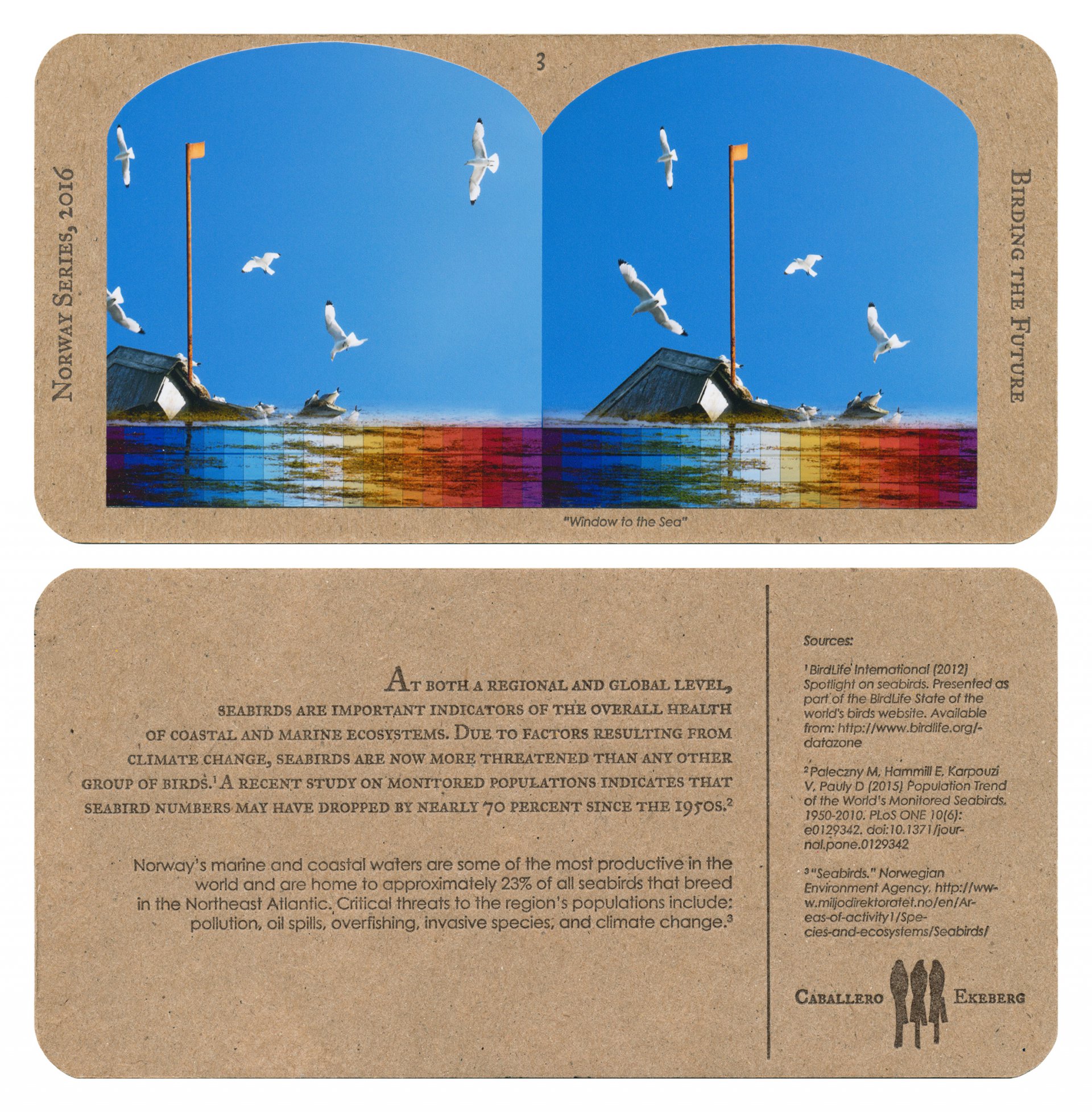 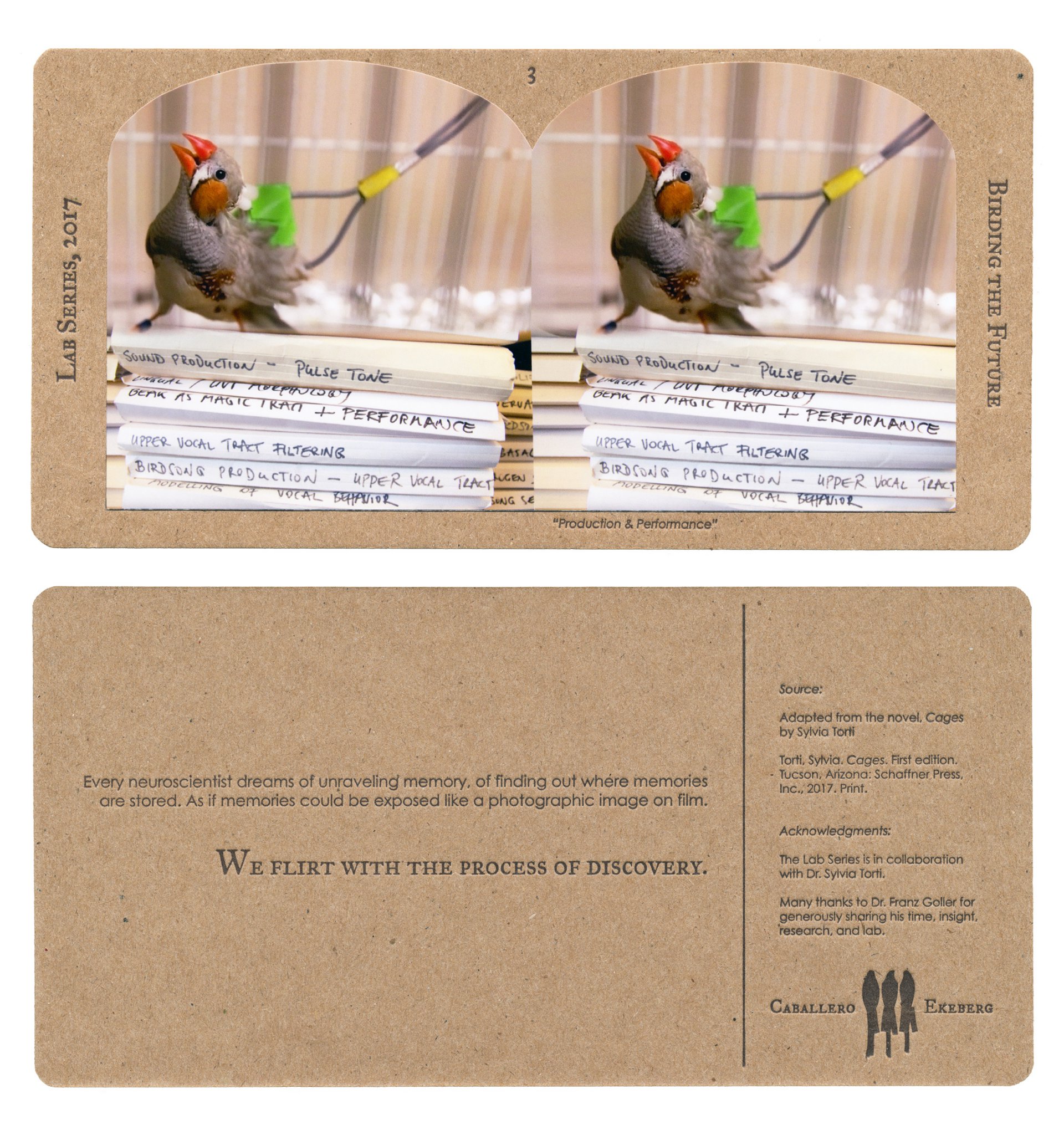 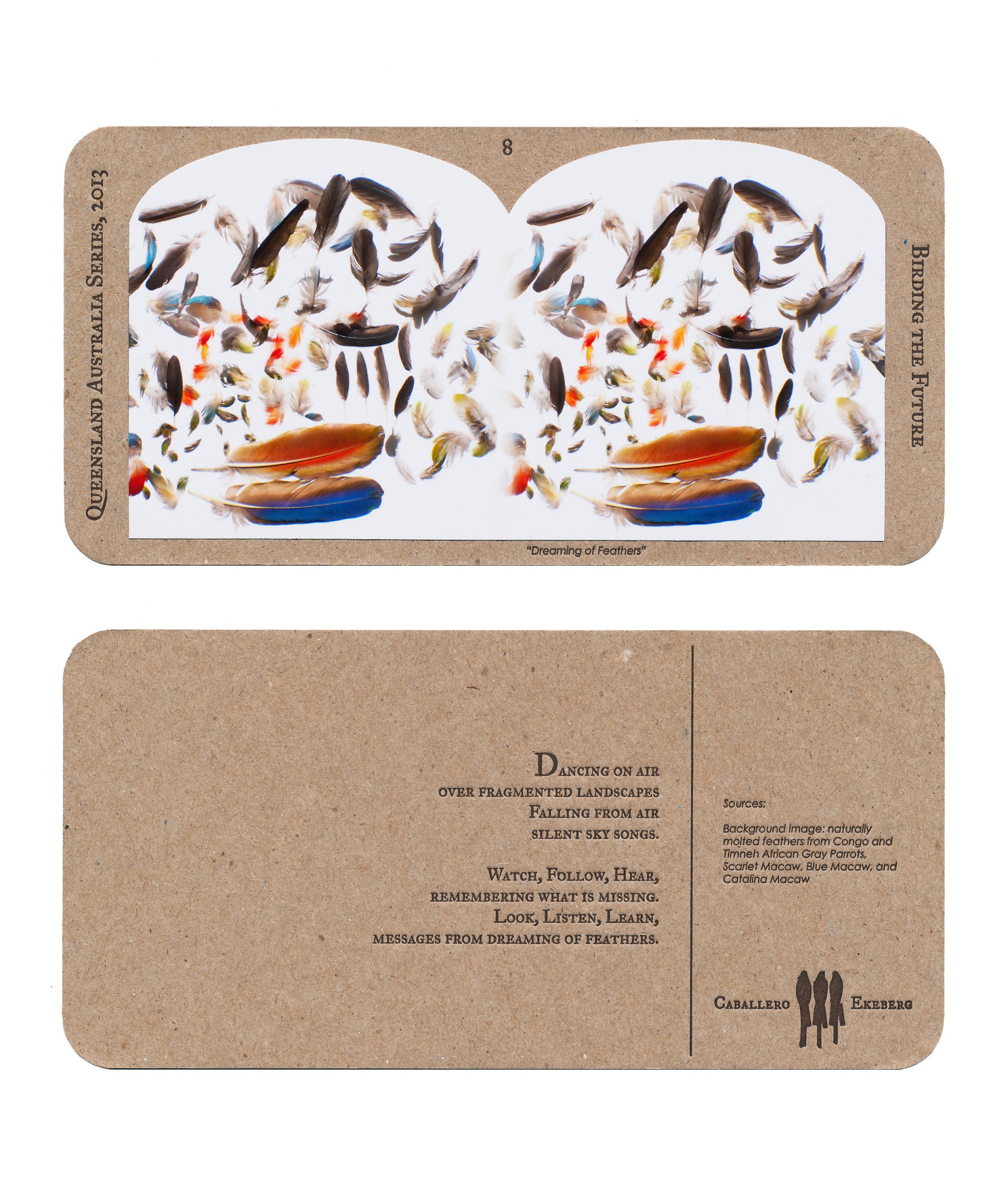 RAY: What is the most interesting thing you learned about birding in Frankfurt?

KC & FE: We are always amazed at how birds bring people together. Everywhere we went we met people who love birds and love watching birds. For example, one day while down by the river Main we ran into a local birder who pointed out a Bar-headed Goose, normally only found in Asia and rare for this region. The Bar-headed Goose is the world’s highest flying bird, migrating across the Himalayas twice a year.

It was also very interesting to learn about organizations dedicated to helping urban birds such as Projekt Oase and Stadttaubenprojekt.

RAY: What is your favorite bird in the Rhine/Main area so far?

KC & FE: Rather than mention one particular species, we would say there was one particular individual we encountered near the bird steps by the Alte Brücke that was quite memorable. A Greylag Goose was struck by a bicycle in 2017 and Projekt Oase helped the bird survive. Though the leg injury was so severe that the goose still has difficulty walking, the bird seems to now be happily living on the Maininsel by the Portikus.

RAY: What places did you visit in Frankfurt/RhineMain to prepare your installation at the Fotografie Forum Frankfurt?

KC & FE: The confluence of the RhineMain near Mainz, Alter Flugplatz Bonames, Schwanheimer Düne (one of the few inland dunes in Europe), Senckenberg Natural History Museum (Naturmuseum Senckenberg) as well as numerous locations all around Frankfurt

RAY: What is the most extreme experience you ever had?

KC & FE: It may be impossible to select one experience. However, one memory we collectively share was hiking up Lovund Mountain in northern Norway (the extreme north!) and coming upon tens of thousands of puffins on guard and flying back and forth to the sea. The soundscape and visual birdscape was like nothing we had ever experienced or been immersed in. It was extreme in the best way possible.